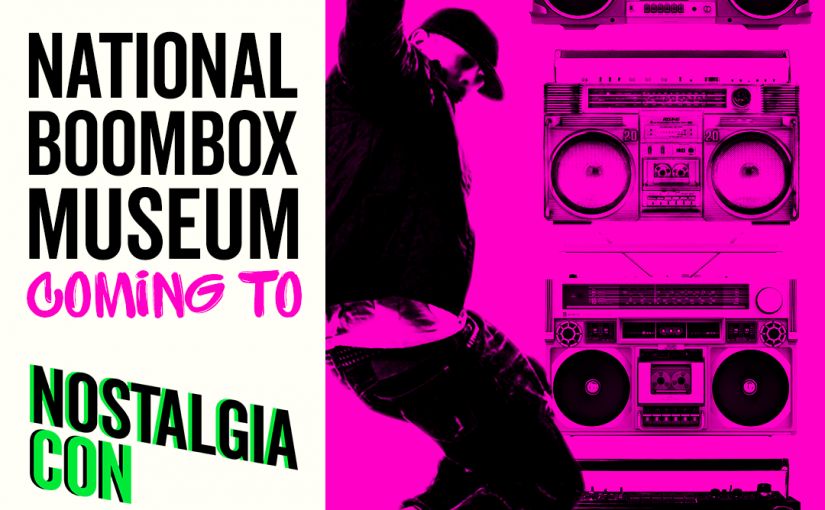 The nation’s most prominent boombox collectors and organizers of NostalgiaCon’s inaugural ‘80’s pop culture convention (www.NostalgiaCon80s.com) are teaming up to launch the National Boombox Museum at the fan expo that will take place September 28 and 29 at the Anaheim Convention Center.

The pop up museum will take center stage at NostalgiaCon’s engaging exhibit floor with a fully curated, interactive experience that features:

— A historic display showcasing rare boomboxes from every year of the 1980s, including the films where they appeared
— A breakdance floor for Hip Hop fans to show off their best dance moves and compete for prizes
— A Wall of Boom photo space that will allow convention-goers to Instagram their personal pictures or videos with some of the most outrageous and colorful boomboxes of the era

“Boomboxes not only helped birth today’s Hip Hop culture, they were also the urban fireplaces for millions of kids who played, danced and made friends with them outdoor from L.A. to New York and many parts in between,” said boombox collector and museum co-curator Howard Medrano, who is also a public school history teacher. “It’s time these iconic machines got the recognition they deserve and our collectors are gonna bring it strong.”

“Breakin’” and “Breakin’ 2: Electric Boogaloo” star Michael ‘Boogaloo Shrimp’ Chambers, who gained worldwide fame for creating the liquid animation style of dance, will be on hand to MC the exhibit. Chambers will also moderate the pop culture panel, “For the Love of Boomboxes: A Retrospective Look at Their Impact in Hip Hop Culture and How to Collect Them.”

Said NostalgiaCon co-founder Manny Ruiz: “This museum captures the youthful, retro cool spirit of what makes our show stand apart as we unite all generations who love Hip Hop, boom boxes and pop culture. This is the first of many experiences that will define NostalgiaCon’s role in curating awesome pop Americana content this year and beyond.”

The National Boombox Museum is part of a dynamic agenda that will showcase Hip Hop performances from The Sugar Hill Gang, Doug E Fresh, Monie Love, and TKA. NostalgiaCon will also pay homage to urban pop culture with a cinematic event for the cult classic “The Last Dragon” that will feature karate and a panel with star Taimak.

About NostalgiaCon
With offices in downtown Miami, NostalgiaCon (www.NostalgiaCon80s.com) is a global fan conventions company wholly focused on celebrating the pop culture icons, influencers, music, newsmakers, entertainers, shows, films, sports, fads, toys, foods and more, that fans feel the most fond of. NostalgiaCon is the first platform ever created to fully scale and monetize the decades both in the United States and internationally through conventions, concerts, events, privately licensed entertainment, social media, and more. On September 28 and 29, the Anaheim Convention Center will host NostalgiaCon, where the 1980’s will be captured in its full glory, capitalizing on the powerful force of nostalgia via the people, trends and moments that define entire generations.

NostalgiaCon is the brainchild of serial entrepreneurs Manny Ruiz, creator and producer of the nationally renowned Hispanicize event and the Mixed Reality Marketing Summit, and Sean Wolfington, Chairman and CEO of The Wolfington Companies and Chairman and CEO of CarSaver, Walmart’s exclusive auto buying platform.